When you go on the road and need to charge your Tesla, there is a chance that you may be faced with the possibility of charging at a non-Tesla station.  If so, that means that the charging cable on your Tesla may not be compatible with the outlet at the station.  What then?  Previously owners would have to purchase separate Gen 2 NEMA adapters for whatever charging outlet they think they might use from Tesla for $35 each.  As of today, Tesla has bundled all seven of its charging adapters into one convenient package.

The new bundle is a great way to maximize your charging options while at home or on the road.  All current Tesla models come with the Gen 2 mobile connector as standard, allowing users to take advantage of any NEMA 5-15 outlets they should come across.  It is not the fastest (coming in at 1.3 kW or about 2-3 miles of range each hour), but for most owners who plug their vehicles in overnight in a standard 120V outlet, it should be sufficient.

If that is not fast enough for you, then you would want to charge at a Level 2 charging station, which runs at 240V and is what you would find at commercial charging stations.  This is where a lot of these adapters suddenly become important.

While it had previously offered seven separate adapters for consumer use, today Tesla released a new bundle with all of them packaged together.

As it says on their website, “Maximize your charging options with the Gen 2 NEMA adapter bundle.  With all seven Gen 2 NEMA adapters in one convenient storage bag, you can charge at any available outlet, at home or on the road.  Simply attach the appropriate adapter to your Gen 2 Mobile Connector, plug into the corresponding outlet and begin charging.”

They also included information on the maximum power outputs and estimated charging speeds for each adapter offered in the bundle:

Priced at $220, the bundle only saves you $20 off of the purchase of all seven separately, but it also comes with a nifty case.  Honestly, this would be overkill for most of us, but for the road warriors out there who regularly encounter many different sorts of outlets (and those who like to be prepared for any eventuality), this sort of a package could be a lifesaver.

AJ has been writing ever since he could first hold a pencil, and hasn't really slowed down since. Previously working as an editor and ghostwriter (he still does those things, actually), these days he's putting his keyboard to good use for multiple tech sites.
@ajmcg_writer
Previous 5 Tesla News Stories: From Semi to Smart Summon
Next The Real Tesla Killer is Inside Its Gigafactory 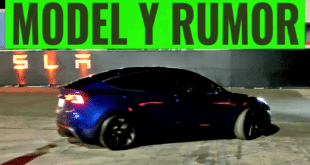 Could Tesla start delivering the Model Y sometime in the next four months? According to …

This website uses cookies to improve your experience. We'll assume you're ok with this, but you can opt-out if you wish.